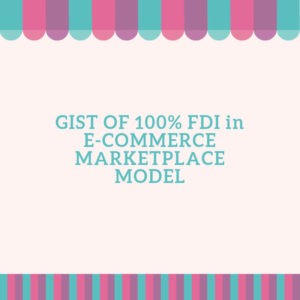 The government on Tuesday has introduced 100% FDI in the marketplace model of e-commerce retailing with a view to attract more foreign investments.
A marketplace entity will be permitted to enter into transactions with sellers registered on its platform on business-to-business basis, DIPP said.
It said that an e-commerce firm, however, will not be permitted to sell more than 25% of the sales affected through its marketplace from one vendor or their group companies.
“In order to provide clarity to the extant policy, guidelines for FDI on e-commerce sector have been formulated,” DIPP said.
Snapdeal’s Kunal Bahl,  was gleeful, taking to Twitter to congratulate the centre for supporting the industry and himself: “Always a great feeling when you stick to the course that you believe in, pays off: Focusing on a pure marketplace and not doing inventory.”
In unveiling rules that permit 100 per cent FDI in the “marketplace” model, and disallowing foreign investment in the “inventory” model, the government could complicate matters for Flipkart and Amazon, particularly.
The 25 per cent rule, as well as the fact that marketplaces cannot “directly or indirectly” influence the price at which goods are sold, are the main issues to watch out for.
Smaller sellers may also mean lesser ability to negotiate price and take advantage of economies of scale, again not in the consumers’ best interest. Also, putting the onus for delivery of goods and customer satisfaction on the seller may result in added complications when it comes to grievance redressal.
In summary, the new provisions legitimize what was already allowed in-principle.
Some ecommerce companies such as Flipkart and Amazon, that draw a large proportion of sales from ‘related’ firms, would face a challenge. New rider places a ceiling of 25 % in sourcing products from one vendor or group firm. Flipkart had separated legal ownership of its sole vendor but WS Retail continues to be a driver of the business; Amazon has a JV with Infosys co-founder Narayana Murthy’s Catamaran Ventures, that operated as the key vendor on Amazon.in
Discounts, and thereby customer acquisition, would get tricky as marketplaces now disallowed from ‘influencing’ sale price, directly or indirectly. This may not mean an end to discounts, but firms may have to look harder to effectively subsidise their vendors.
The norms also cover services marketplaces such as Ola and Uber which is both a boom and a bane for them. They get clarity on the taxation front as they are not deemed to be service providers as long as they do not own the cabs or employ the drivers themselves, buy they will face scrutiny on discounts.
Organised retail chains have been complaining that deep discounts offered by e-commerce companies funded by foreign capital were actually predatory pricing. They may get a breather, as one of the USPs of virtual retailers gets blunted, at least on paper.
Learn more about accounting outsourcing services at Aristotle Consultancy.