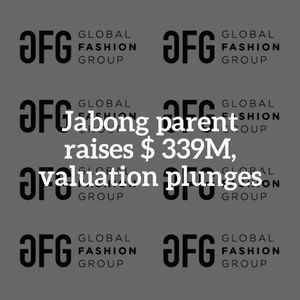 Global Fashion Group, the parent of loss-making Indian fashion portal Jabong, has raised fresh funding from its existing investors but at a sharply lower valuation.
The company secured €300 million ($339 million or Rs 2,250 crore) from Germany’s Rocket Internet SE and Swedish investment firm Kinnevik. The transaction values the company €1 billion, Rocket Internet said in a statement. This is a drop of almost 68% from its previous funding round in July when it was valued at €3.1 billion.
Kinnevik will invest up to €200 million while Rocket Internet will underwrite the remaining. Rocket Internet said it expects to invest up to €85 million including the conversion of an existing investment at the terms of the financing.
Separately, Kinnevik said GFG will get pre-funding of €50 million as shareholder loan during the first quarter.
GFG CEO Romain Voog said the financing will provide the company the necessary capital to execute its strategy of building out its leading position in the online fashion sector in emerging markets. Voog said the company reduced its loss from operations during the first quarter of 2016 compared with a year earlier, resulting in an improvement of the adjusted EBITDA margin by over 10 percentage points.
Formed in 2011, the Luxembourg-based GFG was created by combining six e-commerce brands that continue to operate in emerging markets around the world. It includes India’s Jabong, Latin America’s Dafiti, Russia’s Lamoda, Namshi of the Middle East, Southeast Asia’s Zalora and The Iconic in Australia.
Jabong, which competes with Flipkart-owned Myntra among others, has been struggling for the past many months after expanding at a rapid pace that led to massive losses. The company has been focusing on mending its leaking boat now. Its operating loss (adjusted for share-based compensation), shrank in the three months ended December 31, 2015.
However, its number of orders declined by a third as it cut discounts and its gross merchandise value dropped by one-fifth to Rs 377.3 crore in October-December 2015. GMV is the value of products sold through an e-commerce platform before discounts. It is a key performance metrics used by e-commerce firms even as actual revenue that the firms clock is much less as consumers rarely pay the full price or the maximum retail price for a product.
Jabong, which has a hybrid e-commerce model with both inventory-based business and third-party merchants selling through its marketplace, has also been on the radar of other e-commerce companies. As first reported by VCCircle, e-commerce giant Amazon.com, Inc was in talks to acquire Jabong where the asking valuation was $1.1-1.2 billion. The deal was called off due to a mismatch in valuation by the prospective buyer and Jabong’s shareholders.
Learn more about accounting outsourcing at Aristotle Consultancy.
Sources – Tech Circle