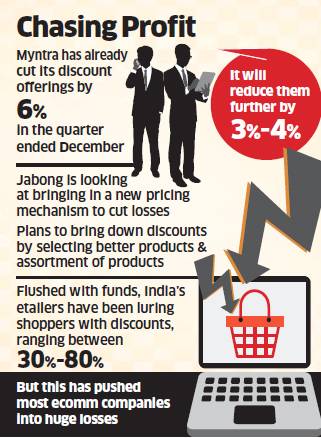 Top online fashion retailers Myntra and Jabong plan to reduce discounts they offer to lure buyers to their sites in a bid to check their mounting losses and to steer towards profitability.
Ananth Narayanan, who took over as the CEO of Myntra in October 2015, said the country’s largest fashion portal has already reduced its discount offerings by 6% in the quarter ended December. “Going forward, you will see the discounts further reducing by 3%-4%,” he said.
The Bengaluru-based company is chasing profitability in the next financial year. Sanjeev Mohanty, who took over as CEO and managing director at Jabong last month, also said his company will clamp down on discounts further to reduce losses.
Flush with billions of dollars of funds from investors, India’s ecommerce companies have been luring Indian shoppers with huge discounts, ranging between 30%-80%.
However, high initial investments and huge advertising and promotional cost in addition to deep discounting to acquire more customers have pushed most ecommerce companies into huge losses. Many of them are now under pressure from investors to shore up their balance sheet and achieve profitability. Myntra is set to narrowly miss its target of achieving $1billion annual gross merchandise value (GMV) this fiscal. The company is now readjusting its target, to reach the milestone by March 2017.
Gurgaon-based Jabong, a unit of German ecommerce incubator Rocket Internet, posted a three-fold increase in the net loss in March 2015, primarily due to deep discounting. Xerion Retail, which runs Jabong, posted a loss of Rs 43.6 crore.
The new CEOs of both the companies have been entrusted with the task of steering their respective companies towards profitability, which they plan to achieve by checking heavy discounts and bringing in supply chain efficiencies. Myntra, which became the first ecommerce player to go app-only, said it has reduced their supply chain cost by 5% in the last quarter. The etailer is now looking at further reducing the cost by 2%.
The Flipkart-owned company clocked $800 million GMV run rate in January 2016.
India’s ecommerce market has huge growth potential. According to Goldman Sachs, India’s ecommerce market is set to soar to $103 billion by FY20 from $26 billion at present.
Learn more about finance and accounting outsourcing at Aristotle Consultancy.
Reference : ETRetail