E-commerce in India – A Reality Check

E-commerce in India – A Reality Check 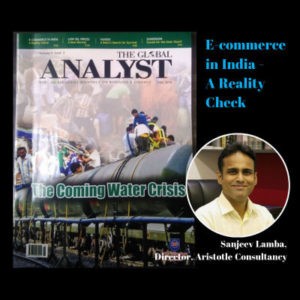 Our Director Mr. Sanjeev Lamba has shared his view point on ‘E-commerce in India – a reality check’ in The Global Analyst magazine’s May 2016 edition. You can read here as well –

From high GMV’s to lowering of valuation, from emphasis on efficiency and even profitability, and a new policy regime—this was the Indian e-commerce market in the first three months of 2016. With over   $5 billion worth investment in 2015 and three to four startups emerging every day, India has paved its way to secure the third position in the world in terms of the number of startups, 4200 and counting, a growth of   40%, by the end of 2015. This will further be supported by the new economic regimes set up for encouraging startups in India.

The development of e-commerce has brought a revolution in the way business operates. The rapidly booming e-commerce sector can highly contribute to economic growth of the country, by enhancing citizen’s life, and by building innovative solutions.

The main reasons for e-commerce unable to unleash its true potential are lack of clarity and uniform procedures.

Since there were many loop holes and not a defined guidelines for ecommerce the Department of Industrial Policy and Promotion (DIPP) released guidelines on 29 March 2016, which clarified the position for foreign direct investment (FDI) in the industry which was one of the major news to Indian ecommerce industry.

The Guidelines, which were given immediate effect, set out the following basic rules (some of which were already there in the Consolidated FDI Policy Circular 2015):

No vendor can account for more than 25% of his total sales through a single vendor in a marketplace.

These rules doesn’t allow the marketplaces to allow discounts directly as they have to come from vendors.

All in all, it gives a level playing field with offline stores, which have witnessed a slump in footfalls corresponding to the increase in e-commerce.

One of the major challenges ecommerce is facing in India is Profitability. The second challenge is access to funds and FDI norms limiting the flow of funds and lastly Marketplace providers are prohibited from directly and indirectly influencing the sales price of goods and services. Organizations right now working under the Marketplace Model and investors hoping to enter the e-commerce sector are prone to be most influenced by the restriction against more than 25% of a marketplace’s deals being made by a single seller. It appears that this limitation was set up to keep marketplace’s suppliers from setting up seller entities for selling in the marketplace, therefore permitting the supplier to utilize an Inventory Model. Suppliers will likewise need to guarantee that by reducing, they don’t impact the cost of products and administrations.

While some of the existing players may now have to reorient their affairs to meet with this conditional regime, it may open up the space for other players and investors who have been waiting for a while for a more clear regulatory regime.

But, certainly future holds the key and time will tell how it will shift and settled. However in short term ecommerce companies who deploy a mix of marketplace and inventory model are the most vulnerable as they may be forced to restructure their businesses to abide by the law.

While e-commerce giants will have to find new sellers to reduce their dependence on large sellers, also it will be interesting to see how marketplaces will comply with the law by clearly providing seller name and details since several e-commerce companies initially started their operations with inventory-led models. However, since FDI wasn’t allowed in direct online retail, these companies had to be restructured to accommodate foreign money.