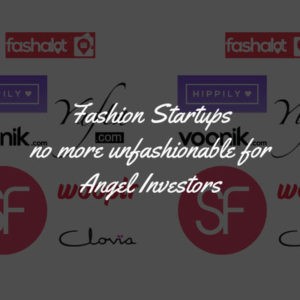 Angel investors who were wary of the fashion and lifestyle space in India are taking greater interest in such startups, going by the number of investments made.
Six investments have been made in the space so far this year up from four in 2015 and one in 2014. The value of investments made in fashion companies stood at $38 million in 2015, up from $21 million in 2014.
One of the investee companies is StylFlip, a social platform to sell and shop pre-owned apparel and accessories, which got an undisclosed sum from real estate developers Raj Gala Shah and Zaheer Memon. YourNest Angel Fund led a pre Series A round for Fashalot, an online to offline location based store discovery platform.
Jaipur-based fashion retail platform Yufta raised a pre Series A round from Ajay Data, a founding member of the Rajasthan Angel Investor Network. Hippily , a Mumbai-based shopping personalisation app raised $250,000 in seed funding from investors like Sridhar Ramaswamy , senior VP , ads and commerce at Google and Rakesh Mathur, founder of Junglee.
The top fashion deals of 2015 were -Voylla, which got $15 million from Peepul Capital; Relevant E-S, Wooplr and Clovia getting $5 million each from investors like Tiger Global, Helion Ventures and IvyCap Ventures; and Voonik getting $6.5 million from a funding round led by Sequoia Capital.
“Investors certainly seem to be taking a greater interest in fashion and lifestyle brands in India and are putting in money where they see growth. It’s a reflection of the changing demographics in India and customers evolving every day. There’s more focus on looking good and spending on fashion,” said imitation jewellery company Voylla’s co-founder and COO Jagriti Shringi.
Shringi said Voylla, which secured the funding in October last year has used it to increase footprint. It is expanding its retail footprint. It is adopting an omni-channel strategy and will open 100 stores this year, and will expand globally to store in store formats in markets like Dubai and the US besides kiosks in major malls across India. Twenty stores are operational currently.
“Investments in the fashion space have reached a consolidation phase now. There’s a big opportunity in the private labels and the big companies will focus on private labels,” said NavinHonagudi, investment director at Kae Capital. The fund has invested in a Fynd, a fashion discovery app that ties up local retailers and lets users locate and track inventory in those stores.
Learn more about accounting outsourcing at Aristotle Consultancy.
Source – ET Retail