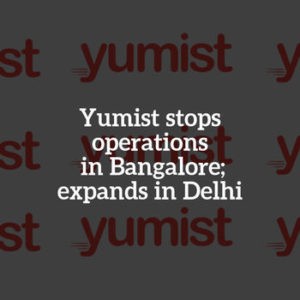 Gurgaon-based food-tech startup operating in the daily meals segment,Yumist, has stopped its services in Bangalore.
Founded by former Zomato official, Alok Jain, along with restaurateur Abhimanyu Maheshwari in November 2014, Yumist, serves home-style meals prepared in their own kitchens.
The startup took a step back and paused Bangalore operations for the time being where it was operating out of a rental kitchen in Bangalore since August 2015. The reason cited for the pause is that Yumist did not own a kitchen facility in Bangalore which stopped them from bringing similar enhancements as NCR and fragmented the brand.
In addition, the startup has launched a 12000 sq ft, mega kitchen for NCR. The move will allow Yumist to significantly upgrade the customer experience. Besides lunch and dinner, the startup will also expand its offering to all-day options, breakfast and snacks.
In December 2015, Yumist raised $2 Mn (about INR 12 Cr.) in a fresh round of funding led by Ronnie Screwvala‘s fund Unilazer Ventures and from existing investor Orios Venture Partners. Steven Lurie, a valley-based investor also participated in in this round of funding.
Ronnie Screwvala of Unilazer Ventures said “We have a great product at Yumist and it’s made a great connect with consumers and so it’s best to focus on one territory and the NCR territory is the largest in the country so this is a good step forward for the growth plans of Yumist.”
The startup claims to have witnessed a doubled number of orders and revenue in the past three weeks.
Earlier in April 2016, Bangalore-based foodtech startup Petoo raised $1 Mn from early stage venture capital firm Axilor Ventures and some HNIs. Other players in this segment include Bangalore-based JiyoNatural,Sattviko, WIMWI Foods, InnerChef, First Eat, Faasos, etc.
Learn more about accounting outsourcing at Aristotle Consultancy.
Source – Inc42