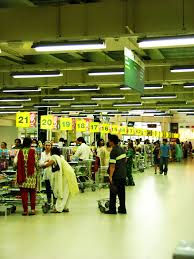 With the high likelihood of NDA coming to power in the 16th Lok Sabha, economists and business professionals are trying to decipher the covert and overt messages in the BJP manifesto. Overtly, the BJP opposes FDI in retail, which is not surprising as traders are a core constituency of BJP. However, Modi is known to favour big businesses and reforms in infrastructure which does not go well with BJP’s decision on opposing FDI in retial. How is BJP trying to balance its interests?
Let us look at the costs vs benefits of big business houses getting into the retail chain – the case for generation of employment with big businesses houses (Indian or MNC) is dubious. Big businesses will displace or atleast halt the growth of traditional retail (read kirana stores). The biggest problem facing India is weak supply chain and IT infrastructure –heavy capital investment is required to construct infrastructure which can be done by big business. India has a very poor supply chain – and investments in warehousing and storage facilities would free up working capital and reduce spoilage – especially in food and perishable items. B2B is politically a less sensitive area and FDI in B2B is less prone to political vagaries –away from sight of voters, the lesser the chances it becomes a political hot potato.
The UPA government tried to encourage FDI in retail, albeit with clauses like mandatory sourcing and back-end investments. It also left the decision of implementing it to the states. An approach with ambiguity involved and potentially retrospective and roll back decisions (e.g. Delhi and Rajasthan) does nothing to convince the MNC s investing in India that their investment interests in the country would be protected.
The details of BJP s policy on retail is yet to be seen. An approach, where the scope of investment is limited, but which is firm and clear in its stance is preferable to a half hearted one. Already, Walmart has signaled that intends to rapidly expand its wholesale store network in India. It may require a lot of political juggling and appeasement but it will be exciting to watch if and how BJP manages to satisfy the pressing need of improvement in the retail sector infrastructure without diluting the interest of its vote bank.
Learn more about finance and accounting outsourcing at Aristotle Consultancy.