Ride hailing services Ola and Uber on Thursday announced the launch of their respective bike taxi services in Bengaluru, a move that will mark their presence in almost every possible land commute option. 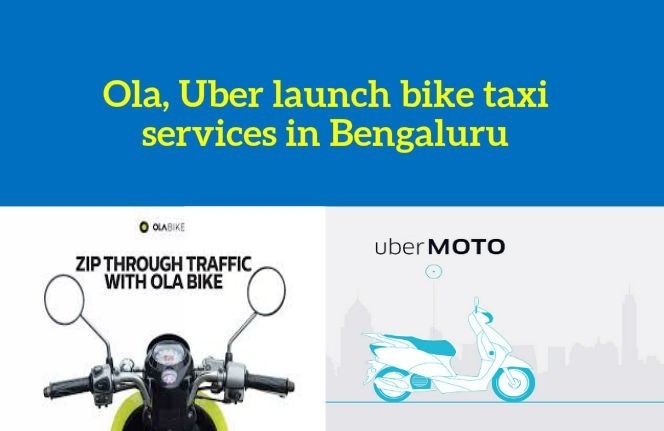 Uber Inc., the world’s most valuable start-up and Ola (ANI Technologies Pvt. Ltd), now offer between themselves an array of services; point-to-point drop, ride sharing, carpooling, autorickshaws and now bike taxis, which is likely to establish their grip over short-distance trips at a lower price point.
UberMOTO, the bike taxi service, will have a base fare of Rs.15, the company said in a statement. Uber will charge Rs.3 per km apart from Rs.1 for every minute of the ride time. Ola will charge Rs.2 for every km apart from Rs.1 per minute ride time charge, on a base fare of Rs.30.
According to industry experts, bike taxis may help both Ola and Uber add significantly to their consumer base, by virtue of the cheaper price points. But, a new service at a cheaper rate will lead to additional cash burn for these companies, as they will have to spend more on incentives for the riders and consumers. According to multiple industry executives, both Ola and Uber are losing money on every booking, which implies that if demand for bike taxis surges, so do their expenses.
“They will continue to work on their margins and financials but they can’t choose to not do this. For a very short distance, bike taxis are very efficient,” said Abhishek Goyal, founder of Tracxn, a start-up tracker.
Ola and Uber’s entry into the segment might put a host of fledgling start-ups under pressure. Ola and Uber have a significantly big existing user base to cultivate, hence they may not need to spend heavily to market the new service, unlike others, which might struggle to find a space in the consumer’s smartphone.
According to data provided by Tracxn, a start-up tracker, there are at least 20 bike taxi start-ups in India. Only Noida-based Now, Gurgaon-based Bikxie and local rivals Baxi and M-Taxi have raised institutional funding. Bengaluru, where Ola and Uber have launched the bike taxi services, is home to at least seven such start-ups: Mu Ride, Pilot, Streetryderr, Rapido, HeadLYT, Hey Bob and Pillionaire.
Industry experts say bike taxi service providers, including Ola and Uber, may face multiple challenges, right from creating demand to maintaining a steady supply of riders. For instance, companies may struggle to ensure a steady supply, because a multitude of riders are currently engaged as delivery personnel with e-commerce companies and hyperlocal delivery start-ups among others.
Ola and Uber may have a better chance to woo a certain section of the riders with hefty incentives to begin with, but matching that spending may be a challenge for smaller start-ups.
According to executives of several bike taxi start-ups, riders essentially come from delivery start-ups or even BPO employees looking for a quick buck on a part-time basis.
Incidentally, both Ola and Uber had earlier added autorickshaws to expand their bouquet of offerings. While Uber discontinued uberAUTO in December last year, Ola continues to expand the category. However, Ola’s interest in autorickshaw’s had taken a toll on niche autorickshaw aggregators across the country, who were struggling to retain drivers in the wake of lucrative incentives offered by Ola, Mint reported on 23 July 2015.
However, bike taxi start-ups are not deterred as they contend that bike taxi is a new category for which a market has to be created.
“The last mile or the shorter distance commute is going to be very different from point-to-point commute,” said Rana Vishal Singh, co-founder of HeadLYT.
In India, bike taxis may face regulatory hurdles as none of the states, barring Haryana and Goa, acknowledge them as a commercial passenger transport service provider.
Both Ola and Uber have claimed that they do not need any specific permit to run bike taxis. Ramegowda, commissioner for road transport Karnataka, however, said that any form of vehicle usage for commercial purposes requires a permit from the relevant authority.
In Delhi and Gurgaon, bike taxis suffer from the lack of parking places. Mohit Sharma, co-founder of Bikxie said policemen in Gurgaon do not allow bike taxi riders to park, especially around the metro stations, a key pickup point.
“Initially, we also had the issue of cops chasing us on the road. But, we have now taken a parking slot near IFFCO Chowk. Most of our fleet is operating out of here,” Sharma said. “Riders come back to this parking lot, which is used as a hub, while waiting for new rides.”
Globally, bike taxis have found significant traction in Southeast Asia. Companies such as Singapore-headquartered GrabTaxi and Indonesia’s Go-Jek are a few big companies in this segment.
Learn more about finance and accounting outsourcing at Aristotle Consultancy.
Source – Livemint